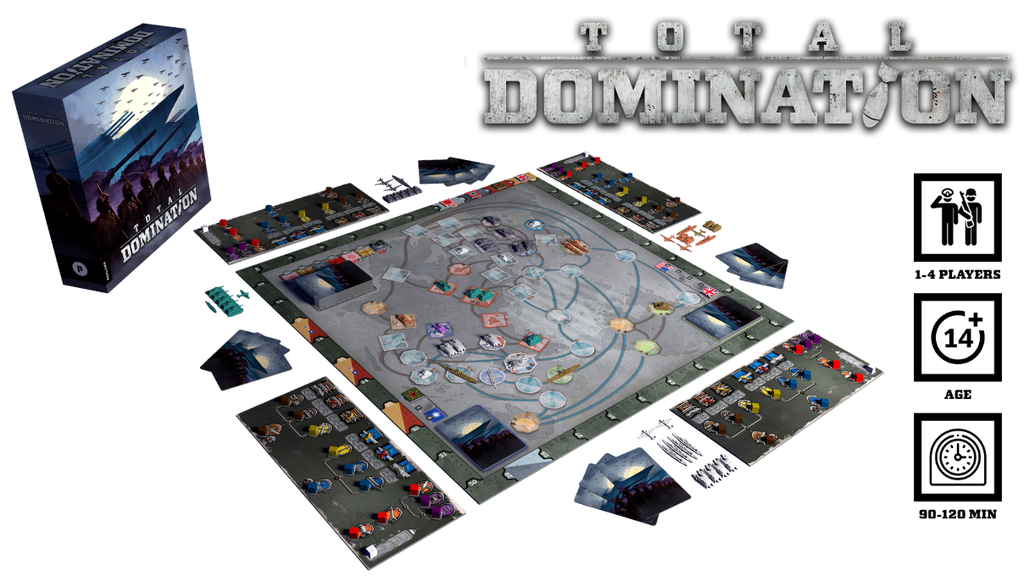 Latest Updates from Our Project:


I hope everyone is safe and enjoying good health.

We all have to face the challenges of tomorrow. Our world is changing dynamically. We thought that the COVID-19 pandemic would not affect our industry so severely and many segments would quickly normalise. This was a false hope. Today, many industries are feeling the consequences of the pandemic and even still suffering from its earlier consequences. For example, manufacturers in transport are running out of metal to build containers. What does this mean for players? Seemingly nothing. However, the small number of containers in transport means that there is no room for components to be transported to us. And we are not the only ones. There are much larger companies that have priority in transport.

This is just one example, and it alone impacts many other areas, which in turn affect us in terms of subsequent delays, which we often only find out about overnight.

In the case of Total Domination, we have unfortunately met the fate of many. The delay we learned about recently means that the games will not be delivered in June. According to current information, the core game will be out in September at the earliest, and the add-on with miniatures and KS exclusive about three months later. We are very sorry about that. If there is any possibility to get it to you sooner - you can be sure that we will take it.

In view of this situation, we have a question for you. Would you be willing to do a two-wave shipment? If you agree, we will work out the specific details.

Currently, we can write that it will look like this: there will be an option where you can choose whether you want to receive the game at a later date (along with KS exclusive and other extras, including a set of miniatures), or you decide to use the two-wave shipping and pay the difference (then, you will receive the core game sooner, and only then KS exclusive and possible extras, such as Deluxe Miniatures Set).

If anyone does not complete this survey, they would simply receive the game and all accessories when everything is available.

Due to some complications we have more time to prepare the miniatures, and so we decided to redesign all the models. In this way we want them to be even more detailed. Take a look at our new miniature designs.


What's the news from the front lines? The enemy is bending to our ideas and successful testing. We are happy with what we have achieved so far. Let us tell you that the solo mode will give you a hard time! Oh, and we can't wait to hear reports about how difficult the game itself will be for you in this module.

For a long time we have been wondering if the title Domination is the most appropriate for this game. Domination is gained in the game in many directions - on land, in water and in the air, militarily and technologically. And the ultimate goal of the game is to achieve total domination. Such a simple concept should be closer to what the game is actually about - so we decided to change the title of the game to Total Domination.

This will also allow us to avoid possible confusion with other games called Domination or that have Domination in their name.

Since the plastic pieces (including the moldings) will be manufactured in China, we are beginning to wonder if we will be able to time production so that the games are completed and shipped out in June. Chinese New Year has just finished and we're getting reports that the queues are starting to grow. There's huge congestion on the railroads, and the loading stations can't keep up. But there’s no point worrying about this, because we expect more precise information soon, and we'll be sure to update you on the situation as a whole as soon as we've investigated everything.


I hope you are feeling well and winter hasn't taken you by surprise like it did us!

We're still testing the solo variant for Domination. It finally feels like what we wanted to achieve. We are constantly testing with independent testers to catch any problems or ambiguities. However, everything is moving towards completion.

We are testing the functionality of an alternative version of the map. It shows the geographical distribution of key positions in the game and the relationships between them. Below you can see our struggles on test printouts (it's not the final graphic design).


I hope all backers are fine and staying healthy.

The most important thing is that the project is under heavy development.

The solo mode is being thoroughly tested by our team every day using TableTop Simulator. It looks very promising for now, but we won't reveal anything about it yet. If you want to try your hand at Domination, you can do it on TableTop Simulatorand Tabletopia.

Since the last update, we have received another set of new illustrations, which will be on the cards and will go into the artbook. Here is a sample of them.

Perhaps it will come as a surprise to many that we are considering making a more realistic map on the other side of the board - with the fields being drawn based on the actual continents. For the time being, work is still ongoing, but perhaps you can say what you think of this idea. Here is the first sketch.

And on our website we have just launched a quiz about Domination, in which you can test your knowledge about the Second World War and, by the way, win a voucher for 100 euros to be spent in our shop (with free shipping!).


We wish you rest, peace and joy in the coming time!


I hope that you remain safe and are taking care of yourself.

It's been a while since the Pledge Manager (BackerKit) opened and most of you should have received invitations to your orders. If you couldn't handle it or if you didn't receive such an e-mail (not in SPAM) please contact me in a private message or by e-mail: marketing@phalanxgames.co.uk

The work on 'Domination' is going well. Most of the rules have been completed - we still have to finish them off and a few issues need to be clarified so that in the final version of the rulebook players will have no doubts. The Solo Mode has not yet been completed, but the designer has found a way on how to introduce this option into the game and we hope to be able to give you some more details on this soon.

We are still testing different layouts to detect potential inconveniences and any lack of balance. So far, we have not found any problems, which gives hope that everything has already been worked out.

The artwork is being gradually developed, as you can see from the following graphics, which will be on cards and probably some of them will be in the Artbook.